Hey friends. Everybody wants to be like me. I feel like the Pied Piper of the canine world. I know you all read about my surgery in February. Well, mom and I found out that Dr. Avery’s dog did the same thing I did…ate a chicken and had to have emergency surgery. Jeesh, talk about do as I say and not as I do. And my friend Molly ate a sock. Really Molly? A sock? That’s not even food! Thank goodness Molly didn’t need surgery and all I know is that I wouldn’t want to be on scooper duty when Molly pooped out the sock!

I ended up back at the doctor’s office a few weeks ago. Mom had her energy bars locked up in one of those big plastic tubs with the latches on them to lock the lids. They’re for amateurs. I unlatched the tub and dove my way through the boxes. I loved the chocolate mint bars. They were so cool and minty even at the velocity at which I scarfed them. Next I found the chocolate coconut box. I’m not a fan of coconut I realized so I only ate one of those. And then….jackpot….I spotted the chocolate caramel nut box and tore my way through it. I would have been home free if I would have thrown out the wrappers, but I left the evidence on the floor along with a bunch of crumbs. Busted again!

Mom tried in vain to make me bring them up. Mom, sticking your finger down a kid’s throat only works on REAL kids. DUH! Next she tried to get me to swallow some hydrogen peroxide. Damn that stuff is nasty. It didn’t have the desired outcome, but my mouth foamed a little. The next thing I knew we were on the way to my doctor’s office. The nurse took me right back to the exam room. Oh hell that was horrible. I don’t know what the doctor gave me, but let’s just say I’ll never be bulimic. Thirty minutes later I was back in the waiting room and I collapsed on the floor in a big furry lump of exhaustion. The doctor told mom that I would be fine and that she and the nurses were discussing how I was the best looking pug they’ve seen in a long time. They should see me when I’m not retching! Not such a handsome sight. I thought my liver was gonna come up too. And just so you know, the mint bars weren’t so cool and minty on the way up.

I was resting for a few minutes and making googly eyes at a little Bichon named Chloe and heaved again. Damn. All the kids and their parents thought it was hysterical and laughed at me, especially those feline kids. They were doubled over and slapping their knees. Some had tears streaming down their cheeks from laughing so hard. Chloe turned away in disgust. The shame of it all…..so much for being my usual stud muffin self. What’s the point of hanging out at the vet’s office if you’re not going to get any dates? I was totally embarrassed so I tugged on mom and we made a quick getaway.

Remember when you were my age and you knew you were in a whole lot of trouble when your mom used all your names when she called you? Well, I got a very loud Pugsley Jay Gold a few weeks ago. After all the food incidents and emergency trips to the doctor, I apparently went a little too far and crossed “the line.” Mom went out one day for a short while and I was angry that she wasn’t home playing with me so I tinkled on her pillow. That’s when I got the Pugsley Jay Gold bellow. Mom knows I have separation anxiety, but she totally wasn’t in the mood for my sad eyes, especially because she knew it was no accident. The next thing I know, I’m in the Army. I report to boot camp Thursday at Valley Forge National Historical Park. I didn’t realize the barracks were operational since they hadn’t been used in 235 years. I must be special. Living in a log cabin the size of a postage stamp may not be so bad.

My CO is Joe Goch of Off Leash K9 Training. Joe trains canine search and rescue STARS as well as IED detector dogs. The only thing I want to search and rescue is my kibble and maybe a bone or two. I am sooooo not going to Afghanistan. I don’t do well in the heat as I’ve told you all repeatedly. Aunt Jody recommended Joe because Princess, her rescue Pit Bull, enlisted a few weeks ago and since she’s so well behaved now, she was adopted yesterday and has a forever home. I already have a forever home! Mom told me that no way am I being put up for adoption again, but since other trainers haven’t been able to break me of my bad habits, it’s the Army’s turn to put some discipline in my life. First they break you and then they mold you their way. I’ve seen enough war movies to know the drill (no pun intended). Since I have such big lips I’m going to volunteer for reveille duty before they assign me to the latrines.

I’m not sure what I have to bring with me so I was looking online and found these cool camo sneakers. They’re a total bargain at $55. Mom said with shipping and handling they’ll cost about $15 per paw and no way am I getting her credit card.

Well, when you put it that way mom…….Just wait until I start dividing the cost of her shoes per foot!

So I’ll let you all know what happens with my training. I think I also have an appointment with the base psychologist too that day. I’ll probably have to lie on a sofa and talk about my mom. She’s so going to regret not buying me my sneakers!

Hey friends. We were experiencing some technical difficulties lately and I’m happy to report that we’re back online and have cable and phone service again. It was very quiet at our house. We missed a lot of baseball and the way the Phillies played the first two weeks of the season, that wasn’t necessarily a bad thing.

Mom went to her first game last week with her friends and ticket plan partners Karen and Scott Shablin and shared her extra ticket with her friend Jerry Clark. I watched on TV as usual….that was before the cable wire was disconnected by a stupid inconsiderate Comcast technician who connected our new next door neighbor by disconnecting us. Anyway, Doc was pitching and he was very um, un-Doclike. In fact, he wasn’t the only one. The Phillies starters at that point had a 37.50 ERA compared to the Mets’ 1.83. Seriously! I don’t have enough toes on my paws to count that high. Mom watched the Big Man’s batting average drop 24 points that night to .146. Jerry and their friend Dale Wilcox developed a new scoring system where you count runs, hits and errors in tallying the Phillies’ final score. We would probably be undefeated. Sigh. I know it’s early in the season and way too soon to panic, but mom said the fans got tired of booing the team and started booing each other when the wave broke down, which allegedly was the only form of entertainment in the ballpark that night. Ouch.

I’m happy to report that after many seasons of enduring most of the Dollar Dog Nights, mom doesn’t have any this year. That’s when they swap out the regular dogs for smaller yucky ones that are barely cooked because they have to make so many. The baseball concession gods have smiled upon her. And the best news…..the onions are back, along with sauerkraut in covered chafing dishes, lettuce and tomatoes. Mom said it looks like a Roy Rogers Fixins Bar. There must have been quite a backlash from fans after the onions mysteriously disappeared last summer. You don’t fu…..mess with Phillies fans and their onions. The Schmitter stand

moved from its previous location near the left field gate to prime real estate a few feet away and in its place is Federal’s Chicken and Donuts. It sounds like the coronary food section.

Has anyone seen the movie 42 yet? Friday on The View, some of the cast members were on the show promoting the movie. The View ladies should stick to arguing about politics because they sure don’t know baseball. Someone who shall remain nameless in order to protect the clueless said that Jackie Robinson’s number, 42, has been retired across Major League Baseball. That’s true….until that person added that no one is allowed to wear it. You wanna tell that to Mariano Rivera? 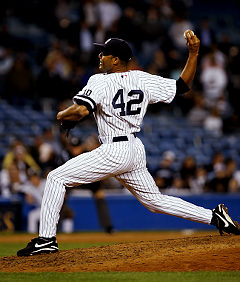 No one corrected that know-it-all. The fact that the show is based in New York makes that pathetic. Maybe they’re all Mets fans, which makes it more pathetic. When number 42 was retired on April 15, 1997 there were 13 players still wearing it and MLB let them keep it until they retired.  Rivera is the only one still active and planning to retire after this season. Thank you again baseball gods! So then that statement will be true. Jeeeesh…..JUST BECAUSE YOU’RE ON TV DOESN’T MEAN YOU KNOW WHAT YOU’RE TALKING ABOUT! Note to self: Start watching The Price is Right at 11 AM.

Mom’s thinking about going to Busch Stadium in July. JULY MOM? Just thinking about that makes me want to shed ALL my fur. If anyone wants to go with her, be my guest, but I’m telling you all now – I’m not going.  Hopefully it will be better than Aunt Karen’s and mom’s road trip to Cincinnati a few years ago. That wasn’t even calendar-worthy. I hope the Phillies play better by then. I’d hate to watch the news and see my mom in red pinstripes flinging herself off the Arch.

So here’s hoping the Phillies get it together once Chooch gets back on the 28th. Not that we’re counting the days or have it circled on our calendars or anything……

Pass the peanuts and Crackerjack!