My mom and I have spent lots of time on opposite sides of the room lately. First I got a timeout. Then I gave her one. This continued for a number of days. I’ve been setting the alarm on my phone for her timeouts and she tells me verbally when mine are over……no alarm clock or anything. My mom is TERRIBLE at math and I have a sneaking suspicion that she’s giving me 10 minutes for every one minute of her timeouts. I can’t tell time so I can’t be certain. All I know is that her timeouts are over pretty quickly and yet I sit in my corner half the day.

So what sent me to timeout initially?

Mom was reading the newspaper and got up to get something. I wanted to see which article she was reading. I can’t help it if I’m not anatomically able to turn the pages.

I got her back though. My mom does not listen. After her gardening fiasco in May, I thought she would leave the landscaping to trained professionals like my friend Scott Shablin of Scott Shablin Landscaping. Nope. Not my mom. We still have the brown spots where she killed the grass. Then some of the neighbor kids were playing and trampled one of our rose bushes. We’re very upset about that. Even so, I can’t blame my mom for that one. I can blame her for this: 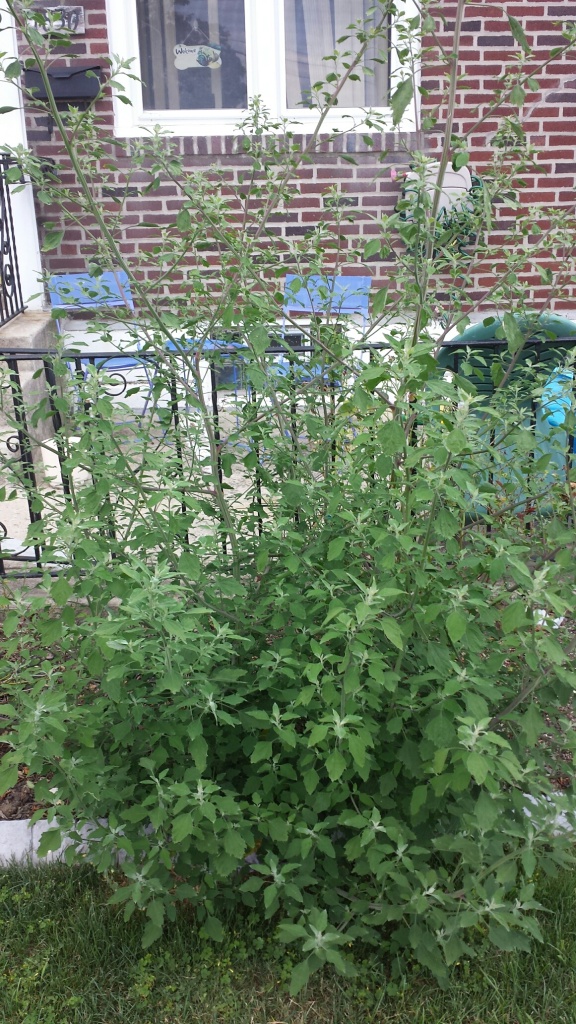 Welcome to my beanstalk! I’m expecting Jack to come sliding down any day now. It didn’t start out as a nearly 6′ stalk of leaves. It entered the ground as 3 Daylily bulbs. Do you see any lilies? Me neither. None. Nada. Zip. Zilch. Zero. Not a Water Lily, Calla Lily, Lily Pad, Lily Tomlin, Easter Lily, Lily of the Valley, Eli Lilly, Tiger Lily, Stargazer Lily or Lily Munster.

Why didn’t my mom know it was going to grow this tall? It’s hiding one of our healthy rose bushes that will probably never be seen again from the street. I feel so sad for the poor little rose bush.

Sigh! Why does my mom do this? I know all the neighbors are talking about us.

Moving on to other topics…….

When I last checked in, I was preparing to send my resume to Mia at Earth Wood & Fiber. I got all gussied up so that I wouldn’t be caught stinky at the last minute in case she calls me for an interview. I even used my Bad Boy conditioner cause I know that girls can’t resist a bad boy. I’m not really bad. I’m just inquisitive. Mom couldn’t find shampoo and conditioner called A Little Bit Naughty and Curious so she bought me Bad Boy. It smells so manly! Mom can’t figure out why the shed control shampoo made me shed. She thought it was supposed to stop my shedding. She said they should have called it Don’t Bother. So much dead hair came off of me that I almost had a brother. I guess the shampoo makes it a controlled molting.

I got another timeout when I jumped out of the tub and flooded the bathroom and then ran around the house and rolled on the sofa.

My mom felt a cyst-like thing on my leg yesterday. She had never felt it before so she took me to the doctor tonight. When we walked into the office, there was a little Pug named Angel in the waiting room. We had never seen another Pug in the office. And guess what happened next? Another little Pug named Misha came in. The nurse said it was a Pugsley party.

A party? For me? It wasn’t my birthday or my adoption anniversary so it really was a surprise. The girls were half my size. Well in length anyway. They were roly poly round and Misha had the largest eyeballs I had ever seen. They make mine look tiny. You can sorta kinda see them in the photo even though it’s blurry because my mom was laughing. 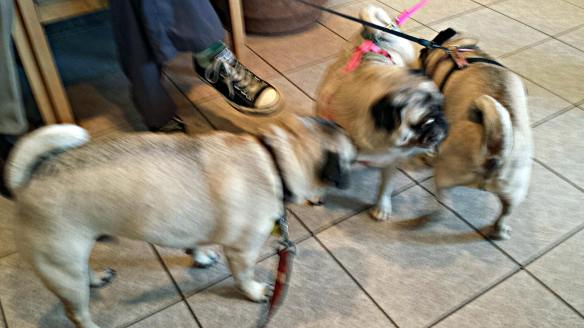 Stop fighting. There’s enough of me for both of you!

The nurse told my mom that she calls all Pugs Pugsleys and she didn’t realize that Pugsley was my name because someone else checked us in. I was bummed after that. I took my place under a chair and only stuck my head out a few times because I was nosy. My mom said that the nurse was just kidding and it really was a party for me. Yippee!

When it was our turn to see the doctor, she took me back into the lab and aspirated the cyst. I didn’t even cry or need a bandage because my blood clots so well. The doctor said it was a subcutaneous something or other. A WHAT? The doctor made it sound like she was going to have to dig straight through my leg. She told us that it was nothing to worry about and it wasn’t something that needed to be removed unless it grows. I hope it doesn’t grow like our beanstalk.

I wanted to look at the cells through the microscope and the doctor wouldn’t let me. I also wanted a photo of my cells to show you. The doctor said she couldn’t take a photo for me. Couldn’t or wouldn’t? I haven’t had gross medical photos since my surgery. My mom went for her annual smushing of the ta tas last week. Her hospital has a new 3-D machine so I asked her to bring me the images so that I could show all my friends.

Guess what she said?

Now I have to tell all my friends that they don’t get to see the ta tas. I was going to sell tickets and everything. My mom makes it difficult to be an entrepreneur.

My neighbor, Roscoe, doesn’t have email so I had to go down the street and tell him personally. 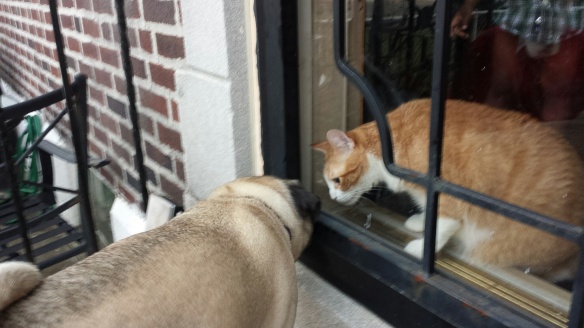 Yeah, he was upset. He said he was going to have to watch TV and hoped that he could find something better than the Phillies game.

I told him to check out the show Extreme Couponing on TLC. Have you ever seen it? I’ll give my apologies now in case someone reading this is an extreme couponer. If you are, will you share your story?

As I was saying…….that’s the craziest show I ever saw. People spend 30 – 60 hours a week clipping coupons, buying coupons from a clipping service, dumpster diving, researching coupons online, making spreadsheets and then putting everything into a binder that weighs about 30 lbs. Then they go to the grocery store, spend about 10 hours there, and buy thousands of dollars worth of stuff and pay practically nothing for it all. Some people end up getting money back.

Can someone tell me why anyone would need 1,000 tubes of toothpaste, 300 razors, 150 jars of pasta sauce and boxes of pasta, 500 boxes of cereal and especially why a teenage guy would have 200 boxes of lady products just because they were free? Is he using them as sponges?

Really, can you tell me why? This is not a rhetorical question. I swear one lady’s husband was ready to divorce her for taking over his man cave with body wash and energy drinks.

I figured out one of the secrets. Wherever these people live, their grocery stores double the face value of their coupons, not like the stores where I live that only double coupons to $1.00. That, combined with their store cards and any catalinas they get (the coupons that print at the cash register) makes everything free or nearly free of charge.

I was convinced that my mom was taking notes so that she could start extreme couponing. I threatened her with another timeout before I hid so that she couldn’t make me her accomplice in this insanity. My mom clips coupons and buys one of something – maybe two if it’s a coupon that can only be used if you buy two products. She doesn’t buy anything that she doesn’t use just because there’s a coupon for it. My pop-pop did that. My mom’s friends would shop in our basement for the things she didn’t use. Mom always thought it was a Depression-era thing. Apparently not since so many young people do it.

I told my mom as we were watching the show that there is no way in this lifetime or the next 10 that I’m going dumpster diving for coupons. That’s a health hazard. On One Life to Live years ago, Al was beaten, thrown into a dumpster and got an infection and died. My mom knows…she and Aunt Lisette were in the studio the day they taped the dumpster scene.

Now I know that if a family falls on hard times, it makes sense to save money. And I also like that some of the people on the show donate what they buy to food banks or send care packages to our soldiers. That’s different. What these people do is just plain scary. Some of them even have their stockpiles insured.

You know people……nonperishable food eventually perishes! Most of those things have expiration dates!!! Look on the bottom of your canned goods and bottled water – even your toothpaste.

I have 42 teeth – well, 37 because I’m missing some, and I’ve had the same tube of toothpaste for 6 months. Granted, I don’t brush twice a day; my mom is happy when she can brush my teeth a few times a month without too much of a fight, but 1,000 tubes???? These people must brush every 15 minutes.

You really have to check it out and tell me what you think. Uncle Jonathan and Cousin Fred – you would be good ones to tell us because you shrink heads. My guess is that it’s the rush of getting stuff for free and seeing how much money you can save each time.

Hey, I just realized that neither mom nor I are in timeout tonight……yet. It’s cuddle time at our house!

Happy cuddling to all of you!

4 thoughts on “Oops We Did It Again!”