I didn’t believe it until it happened to me. I heard about karma and the warnings not to tempt the universe because what goes around comes around. And don’t tell my mom that I used a bad word!

Those of you who follow me on Facebook likely saw my Election Day outfit. If not, here I am working my shift at the polls with mom and Aunt Kelly. I had to tell voters that they didn’t have to show a photo ID in order to vote.

Someone (aka mom) conveniently forgot to tell me that we had to work ALL DAY….until 8 pm. I’m not used to such hard labor. There was no place to nap properly. Sure mom brought my water and treats, but not my bed. What’s up with that? Did she really think I was going to stand on my paws all day? Now I know what the term “dog tired” means. One of my trainers told mom that dogs aren’t spiteful. Well, let me clear up that misconception once and for all. I wanted to go home so much that I wee wee’d on mom’s back. I figured she would have to go home to change her coat and pants and I would get to go too. A voter – one of the few who came to the polls – tattled on me. Mom didn’t believe her and thought I just tinkled on the grass so I did it two more times. HA! It was totally worth a timeout if we could go home.. Whaaaat? When did mom put an extra coat in the car? No fair! Karma sucks!

If you still don’t believe in karma, keep reading.

We all went back to Aunt Kelly’s house because their phone batteries were on empty. I was playing in the backyard and saw mom standing in the house so I ran full speed up the steps to the deck and BAM, THUD, SPLAT right into the door.

While I was yelling to be triaged for a TBI, Aunt Kelly was laughing her ass off. That’s right, I used another bad word. Now I know how my face got so smushed. I must have done this a lot when I was a little kid and blocked it out. Talk about having eyes in the back of my head. I was sure my face turned inside out.

HEY AUNT KELLY, YOU COULD HAVE GOTTEN A PLUNGER AND HELPED PULL OUT MY FACE!!!!!!!!

Mom said it was like watching a train wreck in slow motion. She knew it was going to happen and couldn’t stop me.

After that I ran around like a vilde chaya. That’s Yiddish for wild animal. In and out of every room, all around the house, over and over….I was afraid to stop and rest in case I was concussive. I read somewhere that you shouldn’t sleep, yet I also read that you should rest a lot. I didn’t know what to do so I kept moving. Mom said she didn’t think I had a concussion because I have such a hard head. Damn it…..back we went to the polling place. I passed out as soon as we got home. 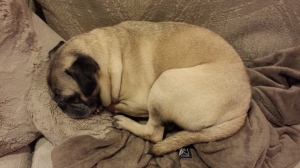 So fast forward to the weekend. Guess who was on laundry and ironing duty?

Hey mom, will I still look handsome if I iron my forehead?

So kids, don’t let karma bite you in the butt….or smash you in the head!